Voice perception research is now a lively area of research, which is studied from many different perspectives ranging from basic research on the acoustic analysis of vocalizations and the neural and cognitive mechanisms, to comparative research across ages, species, and cultures, up to applied research in the field of machine-based generation and decoding of voices, telecommunication, psychiatry, and neurology.

The Oxford Handbook of Voice Perception, edited by Sascha Frühholz and Pascal Belin, provides a comprehensive and authoritative overview on all the major research fields related to voice perception, in an accessible form, for a broad readership of students, scholars, and researchers. The handbook is composed of 40 chapters divided into seven major parts, each of which deals with a central perspective on voice perception, with hundreds of sound and video examples to illustrate the different perspectives on voice perception. Sound and video examples can be found below:

PART I: THE VOICE IS SPECIAL

1.1 ‘Buzzing’ produced by periodic oscillations of the vocal folds in the larynx.

3.2 Example of vocal block in the voice localizer.

3.3 Example of non- vocal block in the voice localizer.

6.1 Example of the voice source of a real voice, derived by eliminating the effects of the vocal tract on the sound.

6.2 Stimuli that received the highest and the lowest mean ratings of pressedness in the study by Millgård et al. (2015).

6.3 Typical example of a register break in a male voice.

6.4 Synthesized tone, first presented without, and then with, vibrato.

6.7 Examples of the Rock, Soul, Pop, and Dance Band styles of singing analysed in the study by Zangger- Borch and Sundberg (2012).

14.2 Plastic song recorded from same individual as in Audio 14.1, at the end of the sensory phase at 60 dph.

14.3 Crystallized song recorded from same individual as in Audio 14.1, at adulthood at 90 dph.

17.2 Tamarin confident threat: (a) 17.2a at normal speed; (b) 17.2b slowed to human auditory range. Note the harmonic structure of the call.

24.1 VIDEO Stimuli taken from Schweinberger, Kloth, and Robertson (2011) show two identical videos of a male speaker onto which either his own voice (a) video 24.1a or another speaker’s voice (b) video 24.1b was dubbed. The audio and video tracks were initially time- standardized with respect to word onsets and overall duration such that the voice of speaker B is in time synchrony with speaker A’s facial movements.

PART VI: MACHINE- BASED GENERATION AND DECODING OF VOICES

31.3 Morphs resulting from interpolations and extrapolations of 25- year- old male speaker with an average voice. Morph continuum ranges from the anti- voice with an identity strength of −1 to a caricature of 1.5 identity strength. 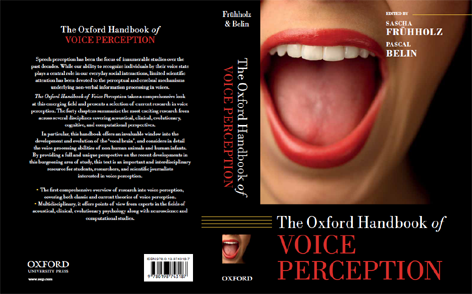